It was really fun at school today, at the end of the day there was a school-wide concert. This concert included a small philharmonic orchestra that played music that went along with a traditional German story called Max and Moritz. Max and Moritz is about 2 boys who play 7 different tricks/pranks on people and what happens as a result of it. David and Lucia got to watch the play though they had no idea what was happening (the only reason I did was because I read the story). I want to read the story to our kids in English! 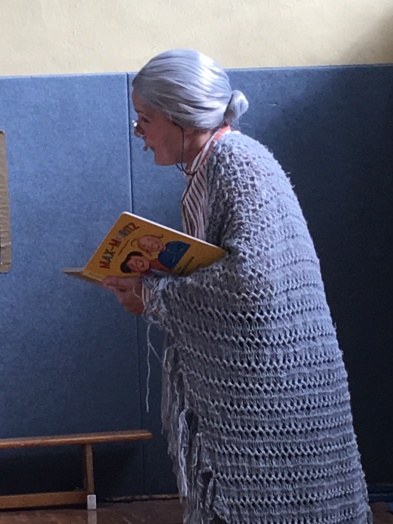 Today also marks the third day of our homeschooling with the kids. We have waited to start because they were all so drained after going to school here in Germany (as was I!). We are only doing about 1 hours worth of work after they get home from school, but this was a good lead into what we are going to be doing the rest of the journey. There will be quite an adjustment period to this new routine I am sure. So far, in three days we have had three tantrums (one from each kid). I really look forward to the day where we can all work together with no tantrums, bust through the school work in a few hours and have the rest of the day to ourselves. But that is not where we are right now; so we must battle.

René came over for “after dinner drinks” tonight which is always a treat. We just sit outside and talk about anything from politics, to religion, to sports. It really is interesting to get the perspective of the USA from someone who isn’t from there and also an opportunity to learn about another’s government, culture, life, etc. These “after dinner drinks” have been a lot of fun and I am going to be sad when we are gone. I am learning so much about Germany and the country, but also recognizing that while we are different, the problems and concerns are the same as the US. It just reaffirms that we are just people, dealing with the same problems and frustrations in life. Of course there are differences and the situations are not exact, but in the general concept they are very similar.

I’m a mom of 3 and about to embark on a journey with my family to serve others in need around the world. My family of 5 will teach English, care for orphans, care for the earth and animals, coach sports, and community development programs. We will travel to 8 countries in 11 months with 3 children. Follow our journey, which is bound to include snags, joys, sorrows, and unexpected adventures. View all posts by familyvolunteers